I saw him across the crowded gallery space that was full of admirers, scenesters, and eccentric gay men. I took in his visage: a white shirt unbuttoned to the navel and summery linen trousers. The top he was wearing reminded me of the one he wore when I met him. As I watched him from across the room, he laughed; it was clear he was in the midst of a conversation. As I assessed the best route to cross the labyrinth of chatty queens (who appeared to be much more amused by each other and their proximity to the bar than they were by the stunning work displayed on the walls), I jettisoned myself from my rooted existence and moved forward, zigging and zagging when it was appropriate. No, not appropriate… necessary. Bouncing off flannel, tank tops, linen, sweaty arms, and leather, I had almost reached his location when it was clear that he concluded his conversation and much like a staged comedic bit, he walked away without seeing me and rounded a corner. My new destination had a clearer path, so I eased my way along the wall and caught his attention next to the merchandise wall. We greeted each other as lovers do, with a kiss followed by a warm embrace.

It was good to see him again; his eyes even kinder than I remembered. The familiarity of the perfect stranger was a sentiment to which I was becoming accustomed. I didn’t know him long, but I remember feeling safe with him and this moment was not any different than the previous time we shared. As we backed out of the hug, he introduced me to his partner– I took in his name, his handshake, and his outfit. Ooh, it was a good one.

“I am loving ALL. OF. THIS!” I said as I pointed at his ensemble from head to toe. I glanced at the clothing items that he was peddling for the artist, and that’s when I saw… him. It didn’t register immediately– almost as if I were dreaming and could not wake up or when you have deja vu and shake your head to clear away the cobwebs. I kept staring and words remained silent, stuck somewhere between my brain and my throat. Running on a loop in my head was, “What the fuck is he doing here? Why now, why here? Get out of my city!”

My perfect stranger of a friend noted the look of shock and uncertainty, gently put his hand on my back, and repeated numerous times, “You two know each other?” He kept saying it, until finally I moved and did the only thing that made sense– I fully extended my arm and pointed at the man in question: an accusation of sorts. He returned my gaze and gave me a pseudo-shocked facial expression, one that I had come to know as a facial expression of endearment, but the sentiments had changed. “Wait, do you two know each other?” I asked, inquiring as to how and why the perfect stranger and the pseudo-shocked man were both in the same room, standing on either side of me. They shook their heads, indicating that they didn’t know each other and this brought momentary relief, but I was still floating in a sea of confusion and mirth.

I stepped a little closer to the pseudo-shocked man, and my pinched throat eeked, “Hi. How are you?” His response was brief as he was in the midst of purchasing a print from the peddler (the perfect stranger’s partner, if you’re following along). He responded, “Good,” and then since he was in the middle of a transaction, he stepped away. He might have said more. My may have wanted to say more.

My stranger of a friend approached me again, “So…” he playfully broached the topic again, “HOW do you guys know each other?”

I paused, watching the man and the peddler walk away. Finally I responded, “I can only tell you if you promise not to bring it up with him.” He agreed to the favor. “He’s my ex-husband.” I paused, taking in the words I just said. “I married him a couple of months ago, and it didn’t work out.” He looked at me, slightly taken aback, partially enamored with the frankness with which I told him. “Wow,” he said. I explained that I may not be able to stay long, but am glad I showed up to support him. He understood and without much more of a thought or breath, I hugged him goodbye.

I planned on leaving without looking back,
without giving my ex-husband the opportunity to see my face one more time, but I couldn’t do it. As I reached the door, where my roots were originally planted, I turned around and looked at him. In a moment, I remembered all the reasons I fell in love with him. He looked over at me as if some invisible person told him to look my way, and I smiled and waved. That gesture was full of every sentiment I held for him: love, anger, betrayal– you know, small things. Wanting to go and talk to him and hug him and apologize and make it all ok, I turned around and left the building in the quickest way possible. 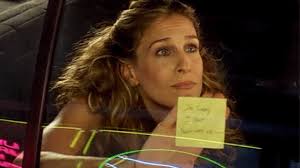 As I reached the sidewalk that was getting cleaned by the rain that had been coming down all day, I darted towards anywhere that wasn’t there. And after a block, I got punched in the throat by reality and tears mixed with the rain that soaked my face. I looked back to see if he was chasing after me. For a moment, I was Carrie Bradshaw and he was Mr. Big. We were destined to fight and make up hundreds of times.

And then it struck me: there I was standing in the rain. No one was chasing me. I didn’t bring an umbrella, much less a crash helmet.

In a sea of people buzzing past me on their way to live their lives, I was chasing myself away from an art opening to which I invited. Instead of being the fabulous person I am, I ran. I was alone (standing on the street); I was unprepared (having not brought an umbrella); I was crying (because it hurt. A lot.)