In a social media tease earlier this week, I made the declaration that I would reveal the true identity of Nayrotica.

I am not going to disappoint in my promise, but I must warn you– you may not like the person you meet: an individual of complexity and contradiction; simplicity and perfect alignment. One may think that I am merely speaking in opposites to create confusion… but am I?

Each of us, no matter our affiliation or status, identifies with multiple classifications on the daily. Some of these identities that we adopt are so ingrained in our being that we forget that we ever made a choice. For example, I choose to cut my hair shorter, which is deemed more masculine. I took off my nail polish, because the looks people were giving me became exhausting– and while I WILL go back to wearing nail polish, I made a choice to give myself a break from the societal glare. (Remember this choice. It will come back later.)

While I don’t entirely reject race, gender, or those labels that fall into the checkable box categories, since I, for the most part, present myself in a fairly normative manner, save the aforementioned desire to paint my nails (and the inherent want to wear eyeliner [I didn’t mention that one]). What I do reject is the reliance on a binary system: a THIS or THAT mentality.

Gender is the clearest example of the either/or scenarios in play, since a majority of the world population identifies as one or the other, e.g. boy or girl. While I don’t have the numbers to back up my assumption on world gender identity, I think it is a fairly safe assumption to say that a majority of the world is NOT actively questioning their personal gender. This system is thrust upon us from breath one. In fact, the choice is made for us– anatomy steers the gender committee into dressing each and every one of us a certain way.

The doctor sees the male genitalia and says, “It’s a boy!”

The doctor spots the female genitalia, “It’s a girl!”

And thus the idea is launched that sex at birth is greater than/or equal to that of gender! (Please note that your birth certificate does not use the word ‘gender.’ It says ‘sex.’)

We then get indoctrinated into the exclusive society of blue or pink, yellow is too confusing. You play by the rules, you get access to special amenities. Keep in mind that we are not just talking about any shade of blue and pink… but pastel. Whomever thought it was ok that a hue appear faded (read disgusting) was a good idea should be banned from Pantone’s ongoing collection of colors and sent to an island where hideous colors go to die. L’île de couleur truand! I am not just talking about blue and pink here, I am talking about every shade of pastel. Believe me, I mean no disrespect if pastels are your favorite, but every offense intended. (See what I did there, contradicted myself!) I make no apology for declaring that pastels are plain ol’ fugly. Yeah, I said it. What?

So… we are supposed to wear one pastel (vomit), or the other (double vomit). And if you choose to be one of those parents who decide not to abide by the rigid societal expectations (bless your hearts), you run the risk of being publicly shamed for your misstep.

“What a cute little… baby?”

This expectation follows you through your childhood, and when you don’t abide by the ‘rules,’ you get teased or bullied or beat up and it’s a sad, sad (and funny) tale to tell later when you’re amazing. Why funny? Because it has to be. No one wants to hear your sad story because we are conditioned to share our happiness, and keep our pain to ourselves. We reposition our own pain for others’ pleasure. How kind of us. But again, that’s not what this is about. Or is it?

That is just gender… Add on top of that race, class, country of origin, ability, to name a few big ones. Within each of these subsets, there are multitudinous different strata that exist and every single one us selects which set works best for us on that given day. The social construction of these labels leads to a hierarchical separation in each sub-group. The elite race. The elite gender. And so on.

Counterpoint: But Nayrotica… You’re insane. You are a white man. Stop pretending to be something special or different and just ease up.

Point: Agreed. I am insane. Next question.

Counterpoint: Seriously, Nay. Why do you care?

Point: Better. Better. Good Q. Thank you for asking. We are finally getting somewhere.

Why do I care? Well. Let’s see. I’m breathing, so… I care. I care that people struggle daily. I mean, I struggle daily, but I get to take off my nail polish when I am feeling a little sensitive. I have that luxury. Not everyone does. And yet marginalized people get up every day and fight. People wake up and know the world is uphill and that upon the return to home, the hypothetical destination will be minutely closer, if not farther away. I care because there are people who are close to me, either biologically or by choice, whom benefit and suffer from an oppressive, single-minded society that focuses on ‘family values’ and colonialist rule. I care because people get killed if they are in the wrong place… Or they are wearing the wrong sweatshirt or their pants are too low… Or they are kissing the wrong person in public… Or they were taking a nap on the street because they have nowhere to rest. These people are getting shot. I care because guns are in the wrong hands… They are in everyones and anyones hands. I will never stop saying that there are too many guns.

Counterpoint: Oh. You are just a highfalutin wind bag.

Point: That’s a pretty fancy word for calling someone out on being fanciful or important.

Counterpoint: Now. That’s not what I meant– I mean, there are guns, sure. But they’re for our protection!

Counterpoint: Look at us, getting sidetracked. This whole notion of identity…

And this could go on and on– Point, Counterpoint, Point, Counterpoint, Point… etc. Eventually it would get heated and devolve into huffed exits. It become clears that even in discussion we rely on a right and wrong sentiment. We are trained from a young age to memorize facts, regurgitate history, quote the greats, pay homage to the elders… this adds up to a society incapable of thinking outside of a system, of a way of life. More than ever, I see people awaiting permission or instruction. So effectively ingrained in the collective social consciousness is a fear of acting without external agency approval. Gone are the days of personal agency and free thought. Permission must be granted for one to continue. (Secret: You don’t NEED permission. They just want you to think you do.) This is true on the streets and in the classroom. Further, I am not declaring history, elder, and fact to be irrelevant; I am remarking on the failure to apply the lessons taught through allegory and oratory. Additionally, if you don’t know what you’re doing, stop and ask for help; don’t act rashly.

Words are just words. Taken literally, they can destroy nations and divide families. It’s the meaning of words assembled in meticulous structures that elicit response and create change.

The great conditioning of the human is well under way and has been for centuries– black or white; right or wrong; up or down; boy or girl; top or bottom; this or that. Think in gradations if it helps… hell, even think in pastels (triple vomit). But think in more than choices of two.

I resist this condition. In a social media tease, I declared that I would reveal the true identity of Nayrotica.

I am complex and contradictory. I don’t make a sense. I wear eyeliner sometimes. I paint my nails. I am a square peg in a boat sailing with a tiger. And I actually kind of liked Sex and the City 2. What? 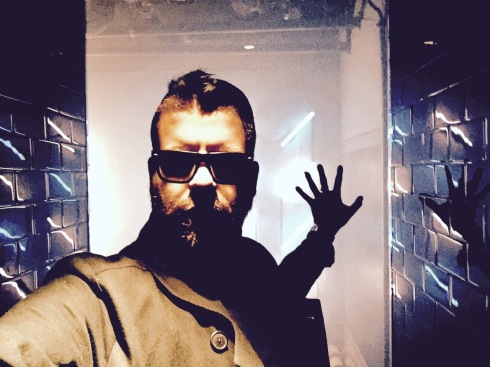